Who is this course for?

You will be required to provide the original or a certified copy of your certificate.
The below link will take you to a website to complete your laser safety online training.
https://www.lasersafetycourse.com.au/

Laser-Tattoff believes that the most effective way to learn how to do laser tattoo removal,
is to actually do it!
Our course features a significant hands-on training section
This will reinforce and introduce didactic subjects.
Some of the topics covered during the tattoo removal training include:

This course provides an in-depth understanding and knowledge of all aspects of Tattoo Removal.
During this course, we will cover:

Subjects that will be covered include:

In addition to what you can learn during the training sessions, students will also be enjoying the following perks:

Last but not least:
After successfully gaining your qualification we will provide up to 12 months mentorship.

The course is conducted face to face:
Theory and practical assessments will be undertaken.

Two days of theory and practical application.
Most days are 10:00am to 4:00pm.

How can I pay for the course?

Payments can be made via Credit/Debit Card (Visa, MasterCard), as well as PayPal.

Please call us to arrange payment.

Laser’s were first invented by a person called Theodore Maiman during the 1960’s.
This rudimentary experiment was conducted by shining a high powered torch on a ruby rod with silver-coated surfaces.
The experiment was prepared in a research lab situated in California.
Then in 1967 Dr. Leon Goldman used a 694 Ruby ND:YAG laser to remove a person’s body ink.
A quite common question that we get here at Laser-Tattoff is:

Do Lasers cause cancer?

The short answer is NO.
According to the Skin Cancer Foundation.
Laser tattoo removal poses no known risk for cancer.
Dermatologists have studied people with tattoos for years.
They’ve never found any evidence that those with tattoos have a higher risk of skin cancer than those who don’t.
Lasers remove tattoos (Ink) by the means of a high intensity light beam, the light beam breaks up the coloured pigment.
Black is the easiest colour to remove because it absorbs all the laser wavelengths.
The color of your skin, as well as how deep the tattoo pigment goes, will also affect the removal technique.

In general this is what you will expect when you visit your laser specialist:

Your laser specialist will give you a protective pair of googles.
Your skin will be assessed normally using the fitzpatrick scale.
A particular wavelength will be selected depending upon your tattoo colour.
A test spot will be conducted by the laser operator to make sure that they have the correct fluency.
The area that is going to be treated will be cooled, Prior/During and After treatment.
The cooling is normally done with an automated mechanical system called a Zimmer.
Technicians use the laser to pass pulses of intense light through the top layers of your skin that will be absorbed by the tattoo pigment only.
Tattoo artists are able to place so much ink in the dermal layers of your skin that they become permanent.

The laser causes a small explosion in the dermal layer of skin where the ink is stored.
This fragments the ink into tiny particles.
Like any explosion-gasses are formed.
Gasses precede the fragmentation and travel the least path of resistance.
The least path of resistance is back out through the top of the skin, the epidermis.
That is why the tattoo will turn white and almost look as if it has disappeared during the first session.
This is just water and gasses escaping, the tattoo will return shortly after treatment.
Smaller tattoos will require fewer pulses while larger ones will need more to remove them.
In either case, to completely get rid of a tattoo, it will take several treatments.

After each visit, your tattoo should become progressively lighter.

Using a Pico Laser such as the Quanta Discovery Pico Laser that was awarded the best and most powerful laser 2017.
Will get rid of your ink more quickly than any other laser on the market today.
Tattoo removal can be uncomfortable, that is why we cool the area with our Zimmer cooler.
But, if the pain is too great a numbing cream can be applied to alleviate the discomfort.
Immediately following the treatment, use an ice pack to soothe the treated area for a period of up too twenty four hours.
And we apply a cream or gel and a sterile dressing to protect it.
You should also be sure it’s covered with sunblock when you’re outside.
We will also supply you with a sheet of aftercare instructions on the day of your first treatment. 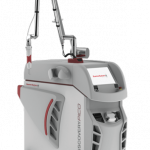